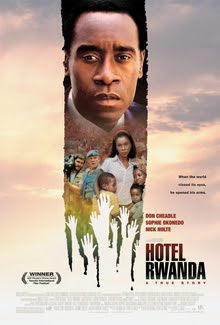 Remember the Best Actor race back for 2004? Every actor nominated but one portrayed a person that actually lived. Though I wondered about the nominees (no love for Jim Carrey in Eternal Sunshine of the Sunshine Mind?) and the eventual winner (should have been Leo's year), it proved that a real-life portrayal is AMPAS' weakness.

I thought that a few scenes in Hotel Rwanda were a little overdramatic. Cheadle gives a really impressive performance as Rusesabagina. Nick Nolte also gave a really good performance. It's hard to believe an event that happened so recently and so violent (over a million people perished) was virtually ignored by the rest of the world. It ain't no Schindler's List, but it has the same impact.

My Rating: ****
Posted by MovieNut14 at 12:33:00 PM
Email ThisBlogThis!Share to TwitterShare to FacebookShare to Pinterest
Labels: 2000s, movies, reviews