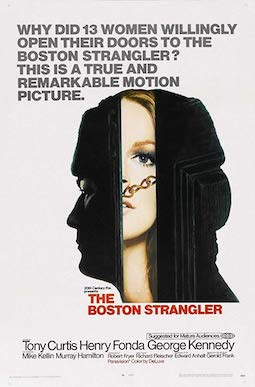 The recent passing of Tony Curtis had saddened me, knowing that Hollywood has lost a great actor. I've seen his work range from comedy (Some Like It Hot) to film noir (Sweet Smell of Success) to epic (Spartacus) to social drama (The Defiant Ones). And with The Boston Strangler, I've added crime to the genres.

The city of Boston is in a state of panic. A murderer is on the loose. John Bottomly (Henry Fonda) is assigned to lead the investigation. Suspects are brought in, but none bring the police any closer to finding the killer. Meanwhile, culprit Albert DeSalvo (Curtis) continues his murderous spree.

Curtis shows a new level to his acting. There is one scene at the end where DeSalvo tells Bottomly a word for word description of what he said to one of his victims before attacking and killing her, as well as body language showing what he did to his victim. That scene alone shows the caliber of Curtis' acting.

Along with Curtis, Fonda also gives a very good performance. If you know me enough you know that I'm a criminology freak, so of course I liked The Boston Strangler. It was good most of the time, but it felt a little much in some scenes. Oh, and if you're curious of DeSalvo's fate (considering the movie was released just a few years after he confessed to the murders) I'll tell you: he was murdered in 1973, his killer never identified. A fitting end for a professed murderer? That I'll leave up to you.