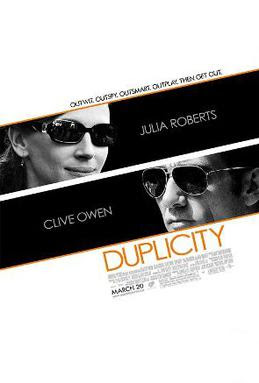 Romance in film is usually dependent on how believable the chemistry is between the actors. If it works, one of two things will happen: either they become lovers on film several more times or they're lovers off-screen. It's usually the former.

Five years after their first encounter, corporate spies Ray Koval (Clive Owen) and Claire Stenwick (Julia Roberts) meet again. This time around, they plot to steal a formula that will make millions.

Although they had good chemistry in Duplicity, I believe that Owen and Roberts have better (and more believable) chemistry in Closer. Tony Gilroy, who's better known for his directorial debut Michael Clayton, gives us a light caper that provides entertainment but not much else. Duplicity is worth at least a look.

My Rating: ****
Posted by MovieNut14 at 4:33:00 PM
Email ThisBlogThis!Share to TwitterShare to FacebookShare to Pinterest
Labels: 2000s, movies, reviews