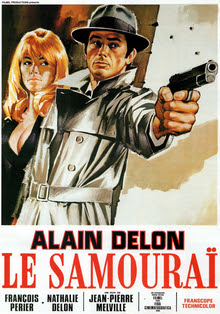 Of the number of foreign films I've seen, the one language that is the most popular is French with three films. Those three are The 400 Blows, The Diving Bell and the Butterfly and Le Samourai.

Jef Costello (Alain Delon) is a contract killer who knows how to get away with the perfect crime. But his most recent hit left him with several witnesses, a police officer determined to arrest him and a vengeful boss.

Yowza, Delon is sexy in this. Talk about killer looks. Le Samourai is sleek and chic. Jean-Pierre Melville shows 1960s France in both a flattering and unflattering light. Flattering for the lifestyle of the time; unflattering for its depiction of law, showing police officers straining to get their man. But still, Le Samourai is a diverse entry of the French New Wave.