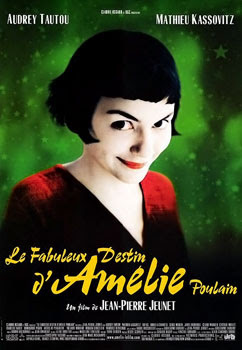 Most of the foreign films I've seen are depressing and downbeat (The Seventh Seal, The Diving Bell and the Butterfly), so it's not that often that a foreign film I see is lighthearted. Then there was Amelie.

Amelie (Audrey Tatou) is a shy waitress in a Montmarte cafe. After returning a long-lost childhood treasure to a former occupant of her apartment and seeing the effect it has on him, she decides to set out on a mission to make others happy and in the meantime pursues a quirky guy who collects discarded photo booth pictures.

This is a refreshing break from the melancholiac foreign films I've seen beforehand. Tatou is enjoyable to watch. Again, most foreign films revolve around death (and occasionally sex). Not Amelie; it's about how to live life to the fullest.

My Rating: *****
Posted by MovieNut14 at 5:09:00 PM
Email ThisBlogThis!Share to TwitterShare to FacebookShare to Pinterest
Labels: 2000s, movies, reviews