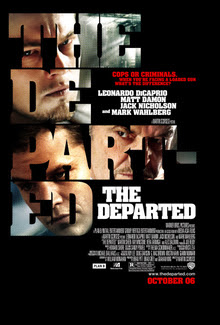 Martin Scorsese is best known for directing one type of movie: crime movies with bursts of violence, f-bombs and testosterone.

Two recent graduates of Massachusetts State Police Academy follow opposite sides of the law: Billy Costigan (Leonardo DiCaprio) is assigned to work undercover with Irish mobster Frank Costello (Jack Nicholson) to get evidence to arrest him. His true identity is only known by his superiors Sgt. Dignam (Mark Wahlberg) and Capt. Queenan (Martin Sheen). Costello protegee Colin Sullivan (Matt Damon) is promoted in the Massachusetts State Police and is the informer of Costello. Each police officer gives his best effort trying to disclose the identity of the other "rat".

Now where to start with The Departed...oh yeah, now I know. Did Scorsese deserve the Oscar for The Departed? Well, yes and no. Yes because The Departed is very good; no because Scorsese had done movies that were better (Raging Bull and Goodfellas come to mind). DiCaprio and Damon break free of the images they were branded with back in the 90s. Sheen and Nicholson give the movie an experienced feel to it. As for Wahlberg, he gives The Departed its badass attitude.

My Rating: ****1/2
Posted by MovieNut14 at 7:39:00 AM
Email ThisBlogThis!Share to TwitterShare to FacebookShare to Pinterest
Labels: 2000s, director: Martin Scorsese, movies, reviews