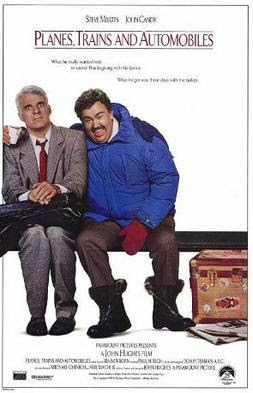 After John Hughes' death back in 2009, I felt like I should watch more of his movies because all I've seen was Ferris Bueller's Day Off. Fast forward a year later and I still hadn't seen anything else by Hughes. Until now.

All Neal Page (Steve Martin) wants is to get home in time for Thanksgiving. Instead, his flight gets cancelled and he's stuck travelling with loud shower curtain ring salesman Del Griffith (John Candy).

Like I said in the intro, Ferris Bueller's Day Off was the only other John Hughes movies I've seen. But through that I knew what to expect. Martin and Candy have some great scenes together. Priceless dialogue ("Those aren't pillows!"), perfect timing and a hilarious use of Murphy's law make Planes, Trains and Automobiles a must-see for the holidays.

My Rating: *****
Posted by MovieNut14 at 9:32:00 AM
Email ThisBlogThis!Share to TwitterShare to FacebookShare to Pinterest
Labels: 1980s, director: John Hughes, movies, reviews