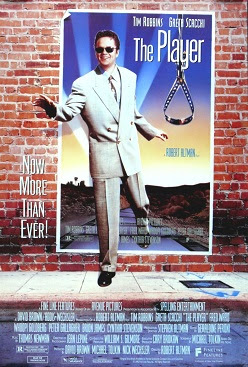 Satires are always funny. As long as you know what they're poking fun at, they're always fun.

Griffin Mill (Tim Robbins) is a studio executive who is responsible for accepting or rejecting pitches for potential feature films. With his career on the line and the impending possibility that he might be replaced by a rival upstart, Grffin now finds his life threatened by an anonymous screenwriter whose pitch he rejected long ago. Drawn into a web of blackmail and murder, Griffin must evade the police investigation that he caused.

I was a little nervous if Robbins could carry a movie by himself considering the other movies I've seen him in has him acting alongside other big name actors (Mystic River, The Shawshank Redemption, High Fidelity, Bull Durham). He does, but only for a majority of the movie. The numerous celebrity cameos were hilarious. The Player was a reprieve for Robert Altman's career, and trust me he needed this.