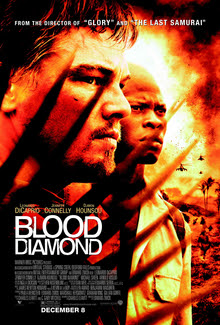 Leonardo DiCaprio has recently become one of my favorite working actors. I've seen him work with Sam Mendes (Revolutionary Road), Christopher Nolan (Inception), Steven Spielberg (Catch Me If You Can) and Martin Scorsese (The Aviator, Shutter Island). Now I get to see him work with Edward Zwick.

Blood Diamond follows the lives of Danny Archer (DiCaprio), an ex-mercenary from Zimbabwe, and Solomon Vandy (Djimon Hounsou), a Mende fisherman. Danny overhears Solomon talking about a large diamond he had hidden after discovering it. Both go on a quest to retrieve the diamond.

DiCaprio and Hounsou give riveting performances in Blood Diamond. The direction of Zwick is excellent. He gives us a startling view of the outburst of violence in war-torn Sierra Leone, a theme that's common in his movies (particularly Glory and The Last Samurai).

My Rating: ****1/2
Posted by MovieNut14 at 4:08:00 PM
Email ThisBlogThis!Share to TwitterShare to FacebookShare to Pinterest
Labels: 2000s, movies, reviews