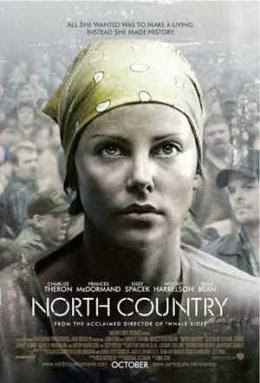 I'm trying not to sound like a feminist (like I've been for a while), but most hard-hitting dramas are directed by men. When one does get directed by a woman, the impact is just as powerful.

Josey Aimes (Charlize Theron) is a struggling mother of two who has recently taken a job at the iron mines in Minnesota. But she becomes a victim of sexual harassment and she has to endure it, no matter how many times she tells someone about it.

Theron acts alongside a superb supporting cast, including Frances McDormand, Jeremy Renner, Sean Bean, Richard Jenkins, Sissy Spacek and Woody Harrelson. The subject matter is very heavy. This is loosely based on real events, giving it a more impressive yet stunning feel. Underrated, yes, and not one to ignore.

My Rating: ****1/2
Posted by MovieNut14 at 9:24:00 AM
Email ThisBlogThis!Share to TwitterShare to FacebookShare to Pinterest
Labels: 2000s, directed by women, movies, reviews