The Life Aquatic with Steve Zissou 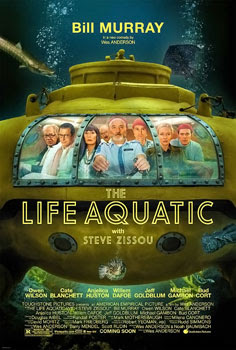 Wes Anderson is slowly becoming one of my favorite directors. Not bad for a guy with six movies to his name.

After witnessing his diving partner getting eaten by a leopard shark, oceanographer Steve Zissou (Bill Murray) sets out to exact revenge on it. But a lack of money and a mutinying crew may prevent him from doing that.

Anderson is probably one fo the few directors who can make his movies really quirky without getting on the level of really weird (sorry, Tim Burton). Murray acts with a hell of a supporting cast. The dialogue is really funny and offbeat. The Life Aquatic with Steve Zissou is a delightful underrated gem from Anderson.