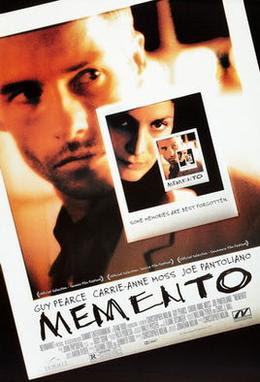 I have seen all but one of Christopher Nolan's movies and I have yet to be disappointed.

Leonard Shelby is an ex-insurance investigator who is trying to find his wife's killer. The problem, though, is that Leonard suffers from short term memory loss, which he got from trying to prevent his wife's assault.

Is there one movie Nolan has directed where when it's over, you don't go "WTF?" (other entries include The Prestige and Inception) Along with Mulholland Drive, Memento has to be one of the most confusing movies I've seen. Yet at the same time it's brilliant. It's an effective thriller, I can tell you that. But honestly, it's a confusing-as-hell one.