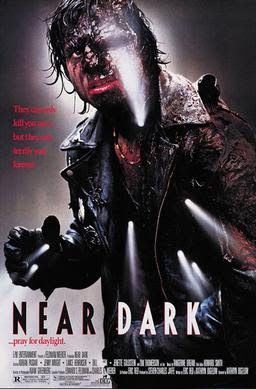 You know what makes vampires suck nowadays? They're overused. Ever since the frickin' Twilight books were published, they have become overrated. It bites. Bram Stoker must be rolling in his grave. Thankfully there are some vampire movies that don't suck or bite.

Caleb Colton (Adrian Pasdar), after being bitten by the mysterious Mae (Jenny Wright), joins a group of vampires who roam around for blood. Caleb is reluctant on killing anyone, and he has to choose between his family and his new group of friends.

Near Dark goes through what I call "The Godfather Predicament", where a movie focuses on a certain subject yet it's not mentioned or shown (it is also proven with the lack of smoking in Thank You for Smoking). Anyway, moving on. Kathryn Bigelow, who's more well-known now thanks in part to The Hurt Locker, gives us a take on vampire movies when they were actually scary (suck it, Twilight). And if you've never heard of Near Dark, it makes sense; it was released the same year as The Lost Boys.

My Rating: ****1/2
Posted by MovieNut14 at 8:27:00 AM
Email ThisBlogThis!Share to TwitterShare to FacebookShare to Pinterest
Labels: 1980s, director: Kathryn Bigelow, movies, reviews