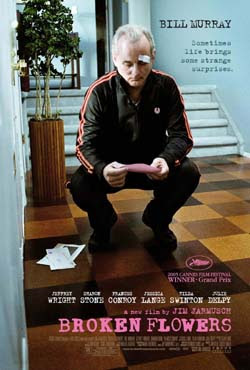 Bill Murray is probably one of the few actors who can be funny and serious at the same time. Whether it's one of his collaborations with Wes Anderson or an independent film, he's a hell of an actor. Probably something no one would've imagined during his Saturday Night Live days.

Don Johnston (Murray), having just broken up with his latest girlfriend, receives a letter from an old flame explaining that he has a son who is looking for his father. Hesitant to go on a journey, he is urged by his neighbor Winston (Jeffrey Wright) to investigate who is the mother of his child.

Along with Lost in Translation, Broken Flowers contains some of Murray's best work. Jim Jarmusch's direction is excellent (for those curious, Broken Flowers was my introduction to Jarmusch). Murray plays probably one of the more sympathetic movie characters in recent memory. You root for him when he's looking for son's mother and you feel sorry when doesn't get any closer to finding out. Broken Flowers is one of the best movies of the last decade.