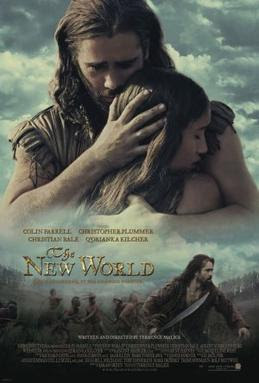 Terrence Malick is an interesting director. He has been in the business for decades, yet he only has four movies to his name.

When 17th century explorer John Smith (Colin Farrell) and a few men go up the river to trade with the Indians, he befriends the princess Pocahontas (Q'Orianka Kilcher) and they fall in love. Their love gets in the way of the duties. When Smith is ordered to leave Jamestown by the King, wealthy tobacco planter John Rolfe (Christian Bale) arrives at the fort. Pocahontas falls apart deciding who she is dedicated to, Smith or Rolfe.

Although visually stunning, I found The New World a little slow for me to really like. I'm not saying I didn't like it. I really liked Farrell and Bale's performances, as well as the cinematography. It's just the pacing made me a little bored. If you're a Malick fan, this is for you.