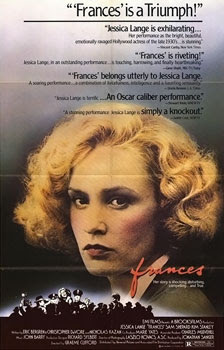 Metal illness in movies can equate to two things: 1) a really powerful movie and/or 2) some serious awards bait.

After her rise in Hollywood, Frances Farmer (Jessica Lange) suddenly takes a drastic turn for the worse as she gets into drinking and her mental health begins to crumble.

Boy, what Frances goes through isn't just a fall from grace; it's a crash and burn. Considering her main rival that year was Meryl Streep in Sophie's Choice, it had to be a neck and neck race between Streep and Lange. Lange clearly gives the performance of her career as the mentally deteriorating Farmer. One minute she could be pleasant, the next minute she could be expressing an explosive anger. It's terrifying.

My Rating: ****1/2
Posted by MovieNut14 at 1:52:00 PM
Email ThisBlogThis!Share to TwitterShare to FacebookShare to Pinterest
Labels: 1980s, movies, reviews