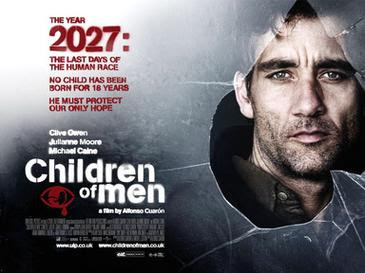 The unnerving thing about dystopian futures depicted in fiction is that it might become true.

Set in 2027, when no child has been born for 18 years and science is at loss to explain the reason, African and East European societies collapse and their dwindling populations migrate to England and other wealthy nations. In a climate of nationalistic violence, a London peace activist turned bureaucrat Theo Faron (Clive Owen) joins forces with his revolutionary ex-wife Julian (Julianne Moore) in order to save mankind by protecting Kee (Clare-Hope Ashitey), a woman who has mysteriously become pregnant.

Damn, this is a bleak movie. And yet, it continues to show optimism throughout. In some ways, it's a re-telling of the Nativity story (pay attention to people's reactions towards Kee). Owen and Moore give excellent performances, as does Michael Caine (who is almost unrecognizable). I'd be more pleased had Owen gotten more noticed awards-wise for his performance. The cinematography is breathtaking and Alfonso Cuaron's direction is outstanding. One of the best movies of its kind.

My Rating: *****
Posted by MovieNut14 at 8:16:00 AM
Email ThisBlogThis!Share to TwitterShare to FacebookShare to Pinterest
Labels: 2000s, director: Alfonso Cuarón, movies, reviews