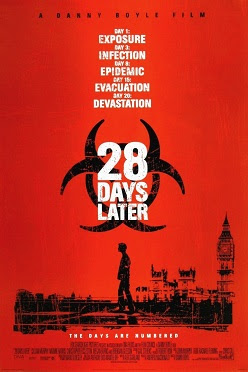 Zombies or vampires: which one is cooler? Had Stephenie Meyer not made them lame, I so would've gone with vampires. But after seeing 28 Days Later, I'm going with zombies.

Upon waking from a coma, Jim (Cillian Murphy) discovers that London is completely deserted. He is told by Selena (Naomie Harris) that a virus has spread throughout England and almost everyone has been infected. They are joined by Frank (Brendan Gleeson) and Hannah (Megan Burns) to find sanctuary from the infected.

Eat your heart out, Romero (no pun intended). You got competition. Actually, 28 Days Later is like a Romero movie on steroids. The only other Danny Boyle I've seen was Trainspotting, so I knew how intense he could get with his directing. It is, by far, the most kick-ass movie I have seen.

My Rating: ****1/2
Posted by MovieNut14 at 9:12:00 AM
Email ThisBlogThis!Share to TwitterShare to FacebookShare to Pinterest
Labels: 2000s, director: Danny Boyle, movies, reviews