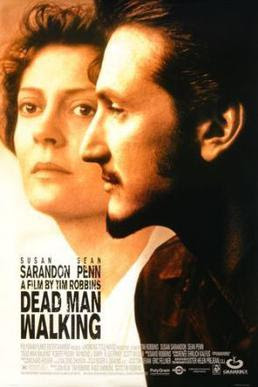 Capital punishment is a vastly debated subject. Some are for it, while others are against it. My opinion? I'm uncertain on the subject. A good movie that focuses on the topic is Dead Man Walking.

Sister Helen Prejean (Susan Sarandon) is asked by death row inmate Matthew Poncelet (Sean Penn) to be his spiritual advisor. As she tries to redeem his soul, she must also reconcile his needs with the heinousness of the crime and the grief of the victims' parents.

It's ironic once you think of it. The lead actors and director are well-known for not only their acting but for their activism and they're making a movie on one of the most debated subjects in existence. But it's not mentioned whether Dead Man Walking is pro-death penalty or anti-death penalty.

The performances from Penn and Sarandon are spectacular. Tim Robbins' direction is also excellent (not bad for his second time as director). It may be fifteen years old (at the time of Dean Man Walking's release, the death penalty debate was at its peak), but it still packs a wallop.

My Rating: ****1/2
Posted by MovieNut14 at 6:01:00 PM
Email ThisBlogThis!Share to TwitterShare to FacebookShare to Pinterest
Labels: 1990s, movies, reviews