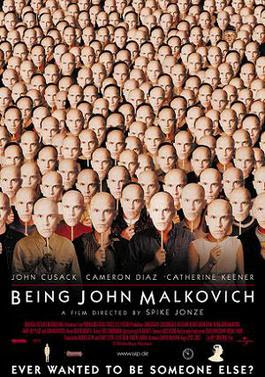 Originality in movies is starting to dwindle down to practically nothing. We're essentially having sequels, reboots and remakes crammed down out throats. I don't know about you, but I'm sick of it. Had it not been for the occasional quirky movie, I'd stop watching them.

Puppeteer Craig Schwartz (John Cusack) has recently taken a job as a file clerk on Floor 7 1/2 of the Mertin Flemmer Building. There, he finds a portal that goes to the mind of John Malkovich (John Malkovich). Upon discovering this, he finds a way to earn money off it, much to the interest of wife Lotte (Cameron Diaz) and co-worker Maxine Lund (Catherine Keener).

Man, this was refreshing after a string of unoriginal movies. It would've been fun had Malkovich gotten an Oscar nomination. Cusack and Diaz are both almost recognizable. Though I didn't like the bittersweet ending, I did love the rest of Being John Malkovich. Quirky characters, off-the-wall dialogue and originality by the boatload, Being John Malkovich is a very funny movie.