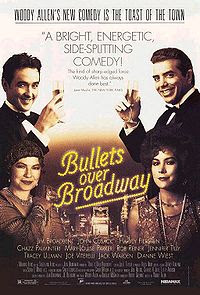 When you watch a Woody Allen movie, the common lead male character is the neurotic writer. In his earlier movies, Allen usually portrayed that character. In his later movies, different actors have portrayed the role.

David Shayne (John Cusack) is an aspiring playwright who is having difficulty getting financial backing for his latest play God of Our Fathers. He's forced to hire Olive Neal (Jennifer Tilly), the girlfriend of gangster Nick Valenti (Joe Viterelli), in order to get money for the production, regardless of the fact that she can't act. Although David isn't too crazy about him at first, he starts to like Olive's escort Cheech (Chazz Palminteri) when it's revealed he has good ideas for the play.

Can I honestly say that casting John Cusack in a Woody Allen-esque role was perfect? Yeah, I know I saw High Fidelity before this (both roles are somewhat similar, in my opinion), but it just works. Dianne Wiest's Helen Sinclair manages to steal every scene she's in and is a homage to Sunset Boulevard's Norma Desmond. Allen's writing is sharp and funny. All of these factors make Bullets Over Broadway a movie not to miss.