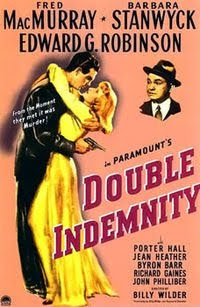 I admire when Billy Wilder ventures into comedy (The Apartment, Some Like It Hot) because I know you're gonna get a good laugh. But when he does drama (The Lost Weekend, Sunset Boulevard), I'm just as entertained.

I like the tense feeling throughout the movie, as well as the screenplay Wilder co-wrote with Raymond Chandler. MacMurray and Stanwyck deliver the performances of their careers with this. Along with comedy, film noir is one genre Billy Wilder is a master of.

My Rating: *****
Posted by MovieNut14 at 10:26:00 AM
Email ThisBlogThis!Share to TwitterShare to FacebookShare to Pinterest
Labels: 1940s, director: Billy Wilder, movies, reviews