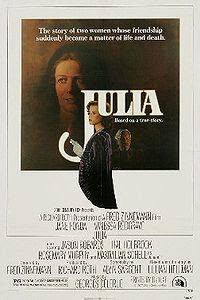 One of the most notable female playwrights is Lillian Hellman. Well known for her plays The Children's Hour, The Little Foxes and Toys in the Attic, she had somewhat of a biopic made a few years before her death.

After becoming a celebrated playwright, Lillian Hellman (Jane Fonda) is invited to a writers' conference in Russia. Her childhood friend Julia (Vanessa Redgrave), having taken on the battle against Nazism, enlists Lillian en route to smuggle money through Nazi Germany which will assist in the anti-Nazi cause. It is a dangerous mission, especially for a Jewish intellectual on her way to Russia.

The performances from Fonda, Redgrave and Jason Robards were strong. Fred Zinnemann's directeion is also strong, but I felt that the movie itself was overly dramatic in some parts.