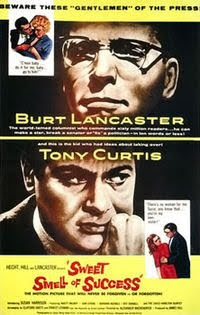 Occasionally some classics' fame vary from "Oh my God, you HAVE to see this" to "Why haven't I heard of this?" One good example is Sweet Smell of Success.

It's interesting that New York City (and the whole movie) seems to revolve around Hunsecker, all because of his power in the newspaper business. But it's Falco who gets the story rolling. All because he's wrapped around Hunsecker's finger.

I admired the film noir feeling throughout. Curtis and Lancaster deliver strong performances, but for different reasons. Curtis breaks away from his earlier roles, while Lancaster shows a more sinister side to his acting.

My Rating: ****1/2
Posted by MovieNut14 at 11:04:00 AM
Email ThisBlogThis!Share to TwitterShare to FacebookShare to Pinterest
Labels: 1950s, movies, reviews