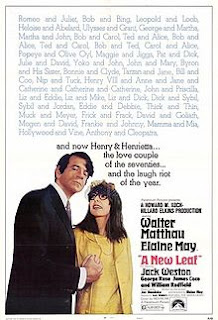 Comedy is a fickle genre for one to tackle. It requires good timing, a clever sense of humor, and a certain level of ingenuity. And only a select few can get that right balance.

Elaine May is one of the lucky ones. Her directorial debut A New Leaf proves that she's a master when it comes to comedy. (The opening scene gives the viewer of what to expect.) Then again, if you're familiar with her comedic act with Mike Nichols, that should be no surprise.

In comparison to May's follow-up The Heartbreak Kid, A New Leaf is decidedly much darker in nature. (Anything where murder becomes a major theme is bound to fall in that category.) Yet even with its occasionally morbid sense of humor, it still manages to be consistently funny.

And the work from Walter Matthau and May make A New Leaf work completely. Matthau in the previous decade proved his comedic abilities from films like The Fortune Cookie (which earned him an Oscar) and The Odd Couple. And May, as mentioned above, had her act with Nichols, so of course she and Matthau would make a great team. (George Rose and James Coco easily steal the show whenever they're in a scene.)

A New Leaf must have been practically a refuge for audiences back in 1971. The events of the previous decade were far from forgotten and no one knew what to expect in the years to come. And again, people need a temporary escape from everyday life.

My Rating: *****
Posted by MovieNut14 at 9:33:00 PM
Email ThisBlogThis!Share to TwitterShare to FacebookShare to Pinterest
Labels: 1970s, directed by women, director: Elaine May, movies, reviews