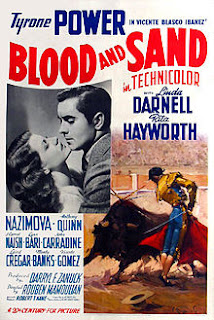 As the Bible says, "Pride goeth before destruction, and a haughty spirit before a fall." Indeed, many times throughout fiction we have witnessed the highs and lows of character with swelling egos. Many times they had it coming to them yet they provide stories that can captivate audiences.

Juan Gallardo (Tyrone Power) of Rouben Mamoulian's Blood and Sand is one such example. Once a child of modest means, he grows up to become an ambitious matador. But as his fame grows, so does his ego and taste for the finer things in life. His mother (Alla Nazimova) and wife (Linda Darnell) try their best to keep him humble but will it work?

In comparison to Mamoulian and Power's previous collaboration The Mark of Zorro, Blood and Sand has decidedly a more lush production value. (Being shot in Technicolor certainly helps.) And it doesn't take much to see how the cinematography and the set design were nominated for Oscars (with the cinematography winning).

Blood and Sand isn't just Power's show. Also among the supporting cast are Rita Hayworth and Anthony Quinn, both at the start of their prominent careers. As proven by their later work, they easily steal the show whenever they're onscreen, Quinn especially.

In toll, Blood and Sand is very good though it gets spotty at times. It's a nice adventurous film with a touch of sexy to it as well. All in all, it's worth a look.