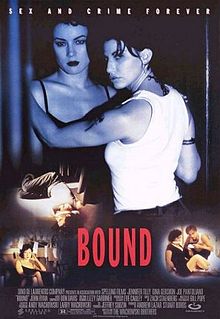 Recently works featuring lesbian and female bisexual characters have been getting a lot of heat. The reason being is that writers deploy the "bury your gays" trope, strictly for the sake of shock value. Hey, newsflash, various straight writers: body counts aren't representation. And it's not that hard to write such characters with killing them off.

At least the Wachowskis knew what they were doing with their directing debut Bound. They knew that lesbians and bisexual women were more than means of sexualization. (Getting really old, by the way, talentless comedy writers.) They knew that theses could be women as complex as any part written for a man.

Of course, there's more to Bound than just decent representation. It's a film that dabbles in various genres. sometimes within the same scene. It goes from gangster movie to crime caper to lust-filled thriller. Think of it as a contemporary Double Indemnity.

As we all know by now, the Wachowskis went on to do bigger projects like The Matrix, Cloud Atlas and Jupiter Ascending. These were films decidedly more reliant on the visual aspect than anything else. Hopefully in the near future the Wachowskis will go back to their directing roots.

Bound provided Hollywood with two promising visionaries, ones that know the fine workings of a taut thriller. But as stated above, the Wachowskis definitely need to make another film of this nature. (One can only go so far with films that are almost entirely CGI.) After all, the proof is in the script.

My Rating: ****1/2
Posted by MovieNut14 at 6:41:00 PM
Email ThisBlogThis!Share to TwitterShare to FacebookShare to Pinterest
Labels: 1990s, directed by women, movies, reviews