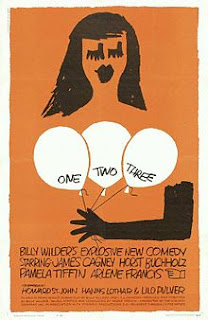 Usually some directors have a certain style to their work after a few films. Sometimes it's how the characters interact. Other times it could just be the genre the films fall under. Either way, you can sometimes tell the film you're watching is one of theirs without seeing their name in the opening credits.

Take for instance Billy Wilder. His films more often than not feature sharp banter and even sharper opinions on politics. (Granted, the former gets more recognized than the latter.) That;s usually why his films have endured all these years later.

With One, Two, Three (a follow-up to the one-two punch of Some Like It Hot and The Apartment), Wilder takes aim at the then-simmering Cold War. (The Berlin Wall was being built during filming.) And with Wilder being one of Hollywood's big names to flee Europe as Hitler rose to power, he doesn't sugarcoat Germany's past actions either.

Wilder frequently knows whom to cast for particular roles in his films and hits the nail on the head as a result. Some instances include playing against type (Humphrey Bogart in Sabrina, Fred MacMurray in The Apartment). And the latter category definitely fulfills James Cagney's work in One, Two, Three. (Seeing the fast pace most of his lines are delivered, it's no surprise that Cagney went into retirement after making this.)

One, Two, Three feels more manic than some of Wilder's other films, almost to the point where it resembles more to a Mel Brooks film. That said, there are other aspects that are pure Wilder. It's not as great as his other comedies but when Wilder's name is attached to a film, you know you have to seek it out.