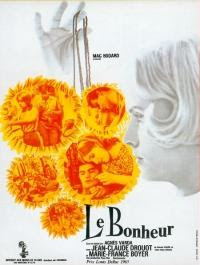 When infidelity is depicted, the reasons behind are seldom of romantic means. Usually it's shown as an escape from the tediousness of marriage. Other times, it only comes into play when the unfaithful party yearns to feel young again. But sometimes an affair can blossom from other reasons.

Agnès Varda's Le Bonheur provides a different reason for why an adulterous liaison might occur. François (Jean-Claude Drouot) feels beyond content with his wife Thérèse (Claire Drouot) and two young children. He decides to extend his happiness to Émilie (Marie-France Boyer), a women he meets while on business. But how will this end?

In stark contrast to the black-and-white cinematography of Varda's earlier film Cleo from 5 to 7, Le Bonheur has a bright palette of colors in every shot. (It could also be viewed as the mindsets of the lead characters.) Perhaps she borrowed a few cues from husband Jacques Demy?

As per usual with Varda, Le Bonheur shows an exploration of life and the people that inhabit it. She shows the world and the flaws its dwellers display. After all, to quote Some Like It Hot, nobody's perfect.

Le Bonheur is further proof that Varda is one of the great for the world of cinema. She knows how to capture everyday life and all of its little imperfections. We must honor her while she's still with us.