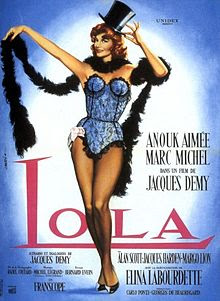 With the French New Wave, there was an emergence in promising directors. Jean-Luc Godard, François Truffaut, Claude Chabrol, Eric Rohmer, Jacques Rivette...they were the key figures in making the movement come to be. But there are a few other names from that time in cinema that tend to get overlooked.

One such name was Jacques Demy. Now his films like The Umbrellas of Cherbourg and The Young Girls of Rochefort are well-known to the film community (as well as his marriage to Agnès Varda) but his smaller, non-musical films tend to get overlooked. Such is the case with his debut Lola.

Much like Varda's Cleo from 5 to 7 the following year, there's more to Lola than it lets on. It's not just about the titular cabaret singer (Anouk Aimée); it's about a small group of in Nantes, their lives intersecting for only a fleeting moment.

Interestingly, Demy had intended for Lola to be a musical but didn't have a budget for it. (It leaves one wondering what this would've been like as a full-fledged musical.) But does this detail hinder the film's quality? Of course not.

Lola was one of several examples to prove that a new film movement was underway but all these years later, it seems to have gotten lost amid the mix of The 400 Blows and Breathless. Demy also showed that he was a promising director for the world of cinema to keep an eye on. (Also expect more reviews of his films here.)