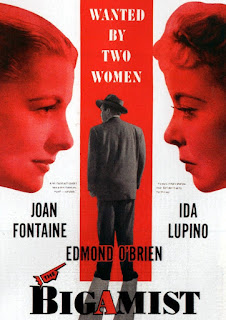 Over the last thirty or forty years, women directors have been on the rise. But of course there have been women making films for as long as the medium has been in existence. It's just many of them have been forgotten by the passage of time.

Take the days of Hollywood when it was still dominated by the studio system for instance. This was an era where only a small handful of directors were willing to tackle risky subject matter. Sure, there were the likes of Otto Preminger and Nicholas Ray who strayed away from the fluff studios churned out but less mentioned on such lists is Ida Lupino.

Though her acting career is more known to some, Lupino as a director had her focusing on material deemed risque at the time. Such was the case with The Bigamist, its subject matter spelled clearly in the title. After all, this was from the early 1950s; nobody wanted to acknowledge that such a thing could even exist.

Lupino also depicts the two women of The Bigamist as more than just the wife and the other woman. Eve (Joan Fontaine) has a head for business which Harry (Edmond O'Brien) thinks is hampering their marriage. Phyllis (Lupino), meanwhile, provides the emotional support Harry so craves from Eve. It's simply a story of a man torn between two women.

The Bigamist is a lesser-known title out of the many big name ones of the 1950s. What was seen as simple melodrama back in 1953 but nowadays it's a pioneering work for female directors. It should seriously be sought out by everyone.