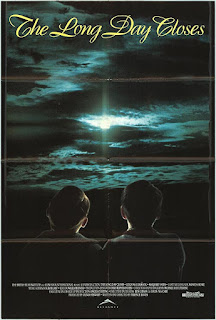 Every now and again, creators of various media present their audiences with something of a more personal nature. Authors write their memoirs with candid details. Actors do performances that heavily parallel their own lives. And directors frequently insert such details into their films.

With Terence Davies' The Long Day Closes, it becomes clear early on that this will be the most personally intimate work of his oeuvre. Set in 1950s Liverpool, Davies depicts a story of childhood and the world surrounding it. It's a world of family, religion, and escape from reality.

This being an autobiographical work, Davies invokes elements from his own upbringing. He mentions coming to terms with his sexuality, his family's religious beliefs, and his regular trips to the cinema. Indeed many directors before and since The Long Day Closes put personal details in their films but Davies' touch makes it feel more genuine.

And there are those who seek out similar escapes to what Davies did all those years ago. There are those who dealt with the brunt of bullying when they were growing up, something that can leave an indelible mark on one's psyche. And as shown throughout The Long Day Closes, they find refuge in worlds of fiction.

The Long Day Closes is a testament to those who simply drift through day-to-day life. They don't live in the moment; they go and hope for that someone to find and understand them. But as is the case with most things in life, sometimes, you just have to wait.