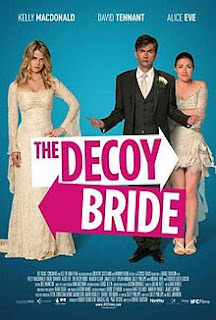 We all know the usual yarn when it comes to fiction of a romantic nature. Boy and girl meet, hijinks ensue, and they're still together by the end. Admittedly it's one that seldom changes (the rare exception being one of a same-sex variety) but if it's one done right, who's complaining?

So how does Sheree Folkson's The Decoy Bride fare? It does follow that familiar formula but it has a certain charm to it that's usually a rarity in films of this nature. (Then again, a majority of films that hail from the British Isles have that tendency.)

In some ways, The Decoy Bride bears resemblance to Local Hero (not just because both feature a leading man of Doctor Who). They share several elements: small (albeit fictional) Scottish town on the edge of the world, outsiders being charmed by the town's quirks. (The most telling detail is the lone red phone booth in some shots.) It's the simple things sometimes.

And as if The Decoy Bride wasn't Scottish enough, it stars the likes of Kelly Macdonald and David Tennant, two of the more prominent names to hail from the country in recent years. Both recognizable faces to British and American TV viewers, they provide a chemistry that's essential to films of this nature.

It's nothing too extraordinary but The Decoy Bride is very sweet in spots. Thanks to the work from Macdonald and Tennant, it's proof that sometimes the best form of temporary escape is through a light romantic comedy. (Well, it's true, you know.)

My Rating: ****
Posted by MovieNut14 at 11:44:00 AM
Email ThisBlogThis!Share to TwitterShare to FacebookShare to Pinterest
Labels: 2010s, directed by women, movies, reviews