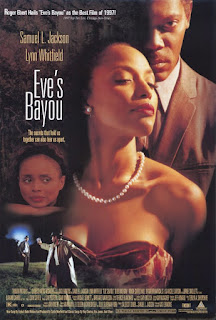 "Memory is a selection of images, some elusive, others printed indelibly on the brain." These are the words that open Kasi Lemmons' Eve's Bayou and set the film's mood. What unfolds during its 109-minute running time is a story of sordid secrets.

Set during a hot Louisiana summer, Eve's Bayou shows there's more simmering within the Batiste household than the sweltering Southern heat. The facade of affluence is enforced by patriarch Louis (Samuel L. Jackson) but the effects of his serial philandering are beginning to seep through. When will the family dynamic unravel?

Eve's Bayou depicts the high pedestal we put our parents on when we're young. But as we get older and become more aware of the world around us, we start to realize that our parents have flaws like everyone else we know. This is the hard truth that Eve (Jurnee Smollett) learns over the course of the film.

There's something interesting in the way Eve's Bayou is shot. It has a sort of muted palette to it, even in scenes shot in the bright outdoors. It's this detail from cinematographer Amy Vincent that adds to the film's dark nature.

Eve's Bayou is rich story that Lemmons captures effortlessly. It lingers on the ambiance of a Tennessee Williams play but it focuses more on the mood of an Ingmar Bergman film (and perhaps even John Cassavetes). Also, more roles of this nature for Jackson, yes?

My Rating: ****1/2
Posted by MovieNut14 at 11:44:00 AM
Email ThisBlogThis!Share to TwitterShare to FacebookShare to Pinterest
Labels: 1990s, directed by women, movies, reviews