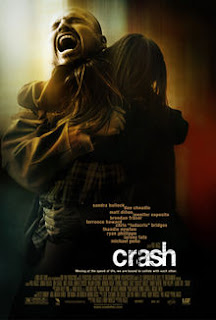 Obviously the world we're a part of is far from perfect. Not one person who has walked this earth has a completely untarnished soul. Fiction often shows how flawed the many inhabitants of this planet are, sometimes to unflinching degrees.

But boy, it doesn't get any preachier than Paul Haggis' Crash. What should have been an interlocking saga of racial tension with several Los Angeles residents ends up being nothing more than an overdone, uneven film laden with stereotypes to the point where it's almost racist. (Then again, what else to expect when the script's written by two white guys?)

How so with the stereotypes? Oh, where to begin? The struggling store owner from the Middle East, the black hoodlum with a grudge against society, the racist police officer, the Asian with certain language pronunciations, the Latino mistaken for a gang member...the list goes on and on as the film continues. (It's also telling that out of the film's many performances, the one that gets an Oscar nomination is the racist cop.)

Though Crash did manage to get one thing right. It shows that society as we know it is crumbling. We need to do away with bias and prejudice in order for us to move forward as people. How much longer until we learn from the mistakes of the past?

For a film supposedly open in its depiction of racism, it's actually rather bigoted most of the time. It feels ten minutes too long after only five, and there are parts that'll have you rolling your eyes so hard you'll end up doing a backflip. And this overwrought propaganda managed to win three Oscars? Why?

My Rating: **
Posted by MovieNut14 at 10:28:00 PM
Email ThisBlogThis!Share to TwitterShare to FacebookShare to Pinterest
Labels: 2000s, movies, reviews