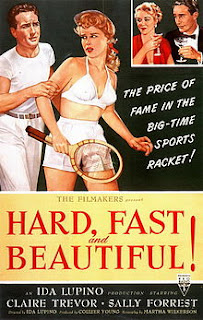 Many times when a mother-daughter relationship is depicted in fiction, the mother will go to any lengths to make sure their daughter's happy. (There are also stories to hit the headlines in real life.) Of course, there are those that go too far...

With Ida Lupino's Hard, Fast and Beautiful, the viewer gets a glimpse into this dynamic. Before we've seen the likes of the doting (Stella Dallas) to the fractured (Mildred Pierce). So where does the bond between Millie (Claire Trevor) and Florence Farley (Sally Forrest) fall?

Indeed, Millie does have the best intentions for Florence (she wants her daughter to have a better life than her) but she doesn't have the best execution of them. She wants Florence to succeed in the world but she knows it won't be easy. Cue the dubious ploys.

Now Trevor's work here is certainly a far cry from her Oscar-winning performance in Key Largo a few years prior. In John Huston's film, she's a submissive (and deeply alcoholic) gangster's moll that's regularly abused. But Lupino has Trevor in a more complex part, one that was more or less a rarity for actresses back then. (At least Lupino knew how to change the game in Hollywood.)

Hard, Fast and Beautiful may not amount to much nowadays but back in 1951, it marked a new era in Hollywood that broke past conventions. Gone were the doting housewife roles for actresses, now there was an emergence of more developed parts. (And this is a process that's still ongoing.)

My Rating: ****
Posted by MovieNut14 at 11:16:00 AM
Email ThisBlogThis!Share to TwitterShare to FacebookShare to Pinterest
Labels: 1950s, directed by women, director: Ida Lupino, movies, reviews