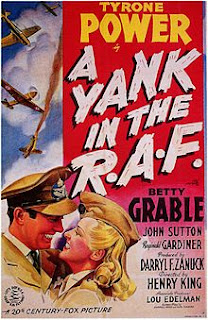 Is there any better escape from reality than a movie? Regardless of the current situation of one's life, it's a nice reprieve from various woes that could be encountered. (Well, it's true.)

And many titles from Hollywood's Golden Age could be viewed as a quick escape from everyday life. With glamorous stars, exotic locations and adventurous plots, they were exactly what the public needed to take their minds off what they read in the daily news. Though sometimes a number of these films add elements from then-current events.

Such is the case with Henry King's A Yank in the R.A.F. Set (and made) in the aftermath of the Battle of Britain, it's admittedly the typical studio fare of the time. But hey, it's a good temporary escape.

How so? It's a familiar plot: man re-unites with former flame, she starts seeing someone else, she ends up being torn between the two. And if you know how the story goes (which you probably do), you know how it ends. Still, as stated above, it's a nice brief escape.

A Yank in the R.A.F. overall is nothing special but the combination of Tyrone Power and Betty Grable certainly works. (As does the dry wit of the many British supporting actors.) To think this was released just months before the attacks on Pearl Harbor...

My Rating: ****
Posted by MovieNut14 at 11:47:00 AM
Email ThisBlogThis!Share to TwitterShare to FacebookShare to Pinterest
Labels: 1940s, director: Henry King, movies, reviews