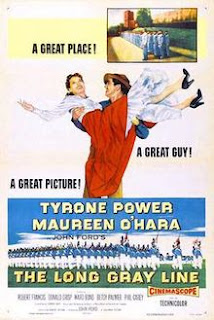 Stagecoach. The Grapes of Wrath. The Quiet Man. The Man Who Shot Liberty Valance. These are just a few prominent titles among John Ford's filmography. Of course when there's a career that lasted for over half a century, there are those titles that frequently get overshadowed.

Take for instance The Long Gray Line. It was released the year before The Searchers and a few years after the Korean War ended. (Incidentally, it was released the same year as Mister Roberts, which Ford half completed before being replaced by Mervyn LeRoy.) And it has a few known traits if Ford's other films (acknowledging Ford's Irish heritage is a big one here), so that alone should be worth a look, yes?

By this time in Hollywood, many of its stars (both established and rising) had served in World War II and some of their work alluded to that. Such is the case with Tyrone Power in The Long Gray Line. (And of course Ford himself was involved in the war too.)

Now Power by this point in his career was trying to move away from his matinee idol status and he did have some success several years earlier. He's good here though his Irish accent either waivers or has him sounding more like James Doohan on Star Trek. (It's really telling when he shares a scene with Maureen O'Hara.)

The Long Gray Line has its moments but it's definitely lesser Ford. It's similar to the likes of Yankee Doodle Dandy with its storytelling methods but it feels stretched out here. Still, the work from Ford, Power and O'Hara warrant at least a look.