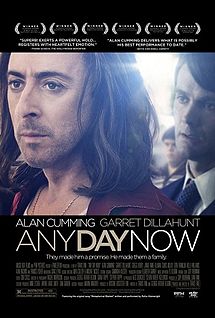 We all seek out peace and harmony at some point in our lives. We want the world we're a part of to be accepting to all those around us. But sometimes that can be an uphill battle to some.

Any Day Now is set in a time where homosexuals were just starting to be viewed as more than the pariahs of society. But the film shows that it's still an unjust world they're a part of. Things may have changed considerably since that time (including same-sex marriage being legalized in various parts of the world) but we still have a long way to go before we reach total equality.

Any Day Now is one of the more underrated titles in recent years. It's not just a story of romantic love; it's also a story of familial love, and Fine depicts its heartbreak to the fullest. Be sure to see it.

My Rating: *****
Posted by MovieNut14 at 1:11:00 PM
Email ThisBlogThis!Share to TwitterShare to FacebookShare to Pinterest
Labels: 2010s, movies, reviews