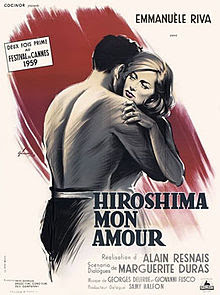 During the opening moments of Alain Resnais' Hiroshima mon amour, the viewer is greeted by shots of two lovers entangled in each other's arms interwoven with footage of the grisly aftermath of the Hiroshima bombing.

The main characters have experienced loss firsthand. The French actress (Emmanuelle Riva) lost her German soldier lover to the war. Her Japanese lover's (Eiji Okada) family was in Hiroshima when the bomb landed. Both are trying to heal their emotional wounds.

Of course, this affair isn't beginning; it's actually in its final hours. Very few films focus on the dying relationships. (Probably because they never end on the happy note cinema often depicts with most filmed affairs.) That's show business, I suppose.

She's recently been receiving high praises for her work in Amour, but it's Riva's work here that showcases her potential as an actress. Just a simple flicker in her face shows her hidden sorrow and troubled mind. As I've said before, that's the sign of a legit actor.

Hiroshima mon amour is a really great film, that's for sure. It sounds simple in concept but it's fantastic in its delivery. Usually I'm not the sentimental type (usually depends on my mood actually), but this got to me.