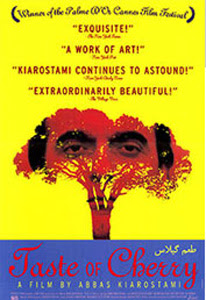 What's the point of living if we're inevitably going to die? You can lead a very prominent life but your reputation will be forgotten sooner or later. So why bother living?

This is something Abbas Kiarostami explores thoroughly in Taste of Cherry. Life will carry on without anyone noticing that you're gone. This is apparently the thought running through Badii's (Homayoon Irshadi) mind. No one will miss him when he's gone, so might as well end it all now.

On that note, we never do find out why Badii intends to end his life. End of a relationship? Loss of a job? Unknown mental illness? There are many possibilities but none clearly answered.

Another noted feature of Taste of Cherry is the cinematography by Homayoon Payvar. Many of the shots are of Badii in his car, looking for an accomplice for his deeds. Rarely does the camera drift out of the car to focus on the scenery around him. The camera only wants Badii.

Taste of Cherry was very good but I didn't adore it as much as I did with Certified Copy. However, both films essentially confirmed that Kiarostami is a director I'm keeping an eye on. The reason? Not only are his films gorgeously shot but his characters are very interesting to watch.