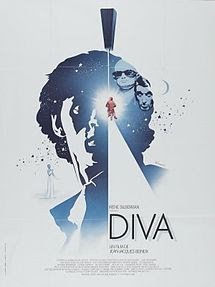 Unwittingly getting involved in a possible scandal. It's amazing at how many characters in fiction get into this situation. Most often they don't realize the situation until it's almost too late.

This is the case with Jules (Frederic Andrei) in Jean-Jacques Beineix's Diva. It started off with him recording a performance of opera singer Cynthia Hawkins (Wilhelmenia Wiggins Fernandez), who has never done a professional recording at any point in her career. Then Taiwanese record pirates find out about the tape and hotly pursue it.

But that's not all. Jules also unwittingly got a hold of a tape that could very much ruin the career and reputation of a police chief. As a result, criminals are pursuing him for that tape. It's safe to say Jules is looking over his shoulder in fear because of those tapes.

Now a premise like that makes the film sound more nuttier than it is. But Beineix makes his film an honest to God thriller. (Seriously, that chase scene in the subway rivals anything in The French Connection.) The 1980s were full of thrillers; Diva is one of the best.

Safe to say it's a film to watch. Along with Beineix's direction, the cinematography by Philippe Rousselot and the music by Vladimir Cosma are great. This is just more proof that French cinema is quickly becoming a favorite of mine.

My Rating: *****
Posted by MovieNut14 at 10:34:00 PM
Email ThisBlogThis!Share to TwitterShare to FacebookShare to Pinterest
Labels: 1980s, movies, reviews