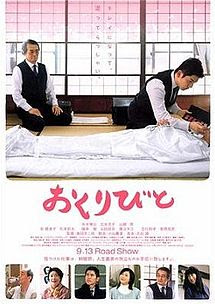 Even in the most grim of subjects, there's a certain beauty in it all. It sounds bizarre but it's true. The ruined remains of buildings, the charred aftermath of a fire...these things have a certain beauty to them.

Yojiro Takita's Departures focuses on a somewhat dark subject: preparing bodies for burial. But Takita doesn't make his film unbearably grim. It instead is a quiet musing on the last stage in life.

At some point in our lives, we'll witness the death of a friend or a loved one. And saying goodbye to them will be hard to do. Daigo (Masahiro Motoki) witnesses many families coming to terms with the deaths of loved ones, some more reluctantly than others. But again, it's something we all have to face at some point.

Again, Takita handles a heavy subject very delicately. Most other films will rely too heavily on the grief of the character(s). Not here in Departures. It's more of an outsider's perspective on grieving, something not commonly found among film.

Departures is a very lovely film, thanks mostly in part to the score by Joe Hisaishi. A few of the final scenes left a bit of an impact on me because of recent personal events. Who would have thought there would be beauty in death?

My Rating: *****
Posted by MovieNut14 at 11:26:00 PM
Email ThisBlogThis!Share to TwitterShare to FacebookShare to Pinterest
Labels: 2000s, movies, reviews