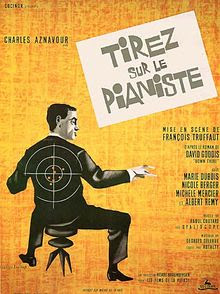 Even with some of his more serious works, Francois Truffaut always has an air of comedy in his films. I think that's what makes him an admired director. (At least in my humble opinion.)

He second film Shoot the Piano Player displays such a trait. Revolving around the quiet life of a barroom pianist, the film is a light homage to the gangster films Hollywood produced. (Looks like the French love American films as much as the other way around.)

Now this film doesn't get as much recognition as it probably should. Well, there are a few logical reasons. For starters, bear in mind what Truffaut's previous film was. Second, this was released the same year as another French film paying homage to American gangster films. That film? Jean-Lu Godard's Breathless.

Anyway, I really liked Shoot the Piano Player. Not as much as Day for Night or The 400 Blows but enough. I am more intrigued as to what else Truffaut made and that's something I'll be venturing throughout this year. Definitely.