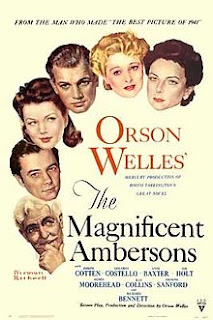 It's always impossible to follow up the project many call your best work. (Why else do you think Harper Lee never wrote anything else after To Kill a Mockingbird?) It must be a daunting task for anyone.

Although Citizen Kane wasn't the essential film back in 1941 as it is today, it still made Orson Welles a maverick in Hollywood albeit a very controversial one. How on earth would Welles follow up his veiled attack on William Randolph Hearst?

The Magnificent Ambersons is a very well done film. The actors, particularly Tim Holt and Agnes Moorehead, are great. In my eyes, this is Welles' best film as a director. (I'm sure there are other people out there that agree with me.)