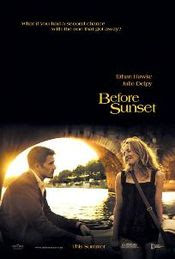 Sequels always seem unnecessary. They're only made strictly because the studios are greedy. Very rarely are they made because the director and stars want to continue the story.

The latter situation was fortunately the case when Richard Linklater, Ethan Hawke and Julie Delpy made Before Sunset, their follow-up for Before Sunrise. Set nine years after the previous film's events, this film chronicles the possibility of Jesse (Hawke) and Celine (Delpy) getting together.

The mood here is definitely different from Before Sunrise. After all, they're meeting each other by chance after nine years of no communication. Naturally their conversations start on a somewhat uncomfortable note. But it's even after that you can tell it won't be easy for either Jesse or Celine.

Also, their physical interactions are much more different. In Before Sunrise, they're quite comfortable with kissing having only known each other for several hours. Here, they keep their distance. (Makes sense actually; Jesse's now married with a kid while Celine's seeing someone.) Still, I think this makes their bond strengthen. (Absence makes the heart grow fonder, after all.)

This is one of those few times where I like the sequel more than the original film. I simply found it more engaging that Before Sunrise, even though I love both films. Now I understand why so many people love these films.