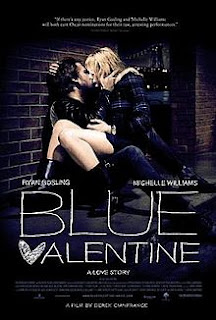 Time and time again, we get the typical love story from Hollywood. Boy meets girl, they fall in love, they get married and they live happily ever after. Fast forward a few years down the line. Is it still the same?

This is what Derek Cianfrance's Blue Valentine explores. Through flashbacks, we see how Dean (Ryan Gosling) and Cindy (Michelle Williams) met and eventually marry. But in the present, it's clear that the honeymoon is definitely over. What caused their love to die out?

Cindy initially wasn't very into Dean, but she softened up to him after a while. It's likely she was unsure about them getting married but kept it hidden. Williams displays Cindy's somewhat insecure nature in a subtle way. (Her performance here is also proof that Williams is one of the best actresses working today.)

Dean in turn is somewhat similar. He admitted he never had any plans of settling down but when he realized his marriage is crumbling, he's willing to do anything to keep Cindy in his life. Who better than Gosling to play this role? (How was he not equally nominated?)

If you think there will be some happy moments in this, forget it. It just gets more and more depressing with each scene. It's still a great film though thanks to the work from Cianfrance, Gosling and Williams. It's just not the ideal thing to watch if you're in a steady relationship. (It is ideal if you've just gotten out of a relationship...I think.)

My Rating: *****
Posted by MovieNut14 at 11:34:00 PM
Email ThisBlogThis!Share to TwitterShare to FacebookShare to Pinterest
Labels: 2010s, movies, reviews