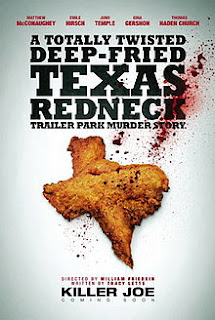 During the first few moments of William Friedkin's Killer Joe, you get the assumption that the film is going to be focusing on the trailer trash family. It doesn't take long to realize that there's something much darker going on.

What exactly? They're planning a murder so they can get the insurance payout. They even hire a hit man (Matthew McConaughey). The deed's done quite quickly, but it's the aftermath of the crime where the true horror happens.

It's really revolting that people can simply plan a murder without giving a second thought. They don't give a damn about anything except themselves and their own personal cravings. This is precisely why humans are the scariest beings alive.

And boy, do the actors prove that fact effortlessly. Emile Hirsch, Thomas Haden Church and Gina Gershon shine in their unsympathetic roles. Juno Temple is practically the embodiment of corruptible innocence here. But it should come as no surprise (especially now) that McConaughey is the best among the cast. (I wonder how many jaws were dropping when people finally realized he could act?)

Man, this film is brutal. (Then again, what else do you expect from a film called Killer Joe?) Perhaps even too brutal for Friedkin's standards. (Best proof? That now infamous fried chicken scene.) Also, I really hope August: Osage County (another work of writer Tracy Letts) isn't as vicious in its depiction of human behavior.