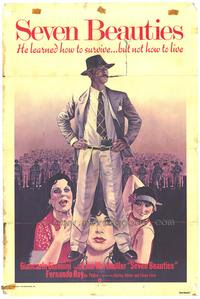 Even throughout its eighty-five years of existence, a majority of the films and performances nominated by AMPAS are strictly remembered because of their nominations. (This is the situation for a majority of the supporting acting nominees.)

This is also the case with Seven Beauties evidently. Nowadays it's mostly remembered because director Lina Wertmuller became the first woman nominated for Best Director for that film. (Its star Ginacarlo Giannini also garnered a nomination.) Not a lot of people even know what it's about.

Seven Beauties revolves around a small-time hood (Giannini) during World War II. He finds himself in a concentration camp and is willing to do anything to stay alive, including having sex with the obese commandant (Shirley Stoler).

The way Wertmuller makes Seven Beauties has the film border on the line between farce and tragedy. It's not exactly the same way as, say, Fellini might do with his films, but it's definitely bold on Wertmuller's part. (More female directors need to be this adventurous.)

All in all, Seven Beauties is a good film but...odd. I'm not sure if Wertmuller's films are normally like that, but it's a different change of pace. Giannini is also good as well. If you like unconventional films, then I'm sure you'll like this.

My Rating: ****
Posted by MovieNut14 at 5:40:00 PM
Email ThisBlogThis!Share to TwitterShare to FacebookShare to Pinterest
Labels: 1970s, directed by women, movies, reviews