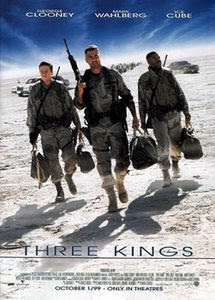 I honestly wonder how David O. Russell's mind works. Who else could make a movie about existential crises and depict it as a comedy? (Well, other than Woody Allen perhaps.)

Being the kind of person that I am, I got curious as to what else Russell directed. I opted for Three Kings, which most people call his best work. It's clear as to why. Going against the norms for most war films, Three Kings depicts not the ongoing carnage of war but its harrowing aftermath.

It's weird. When I first read the premise of Three Kings, I was expecting something along the lines of The Treasure of the Sierra Madre. What I got instead was a film that captures the raw consequences war leaves behind. The film feels even more unsettling in the aftermath of 9/11.

The cast is interesting. A pretty boy TV actor (George Clooney), two rappers (Mark Wahlberg and Ice Cube) and a music video director (Spike Jonze) are the main actors. And surprisingly they're all great. My favorite of the quartet is Wahlberg, who pretty much proved here that he's a legit actor. (Well, this, Boogie Nights and We Own the Night.)

Three Kings is surprisingly great. Usually I'm not up for war films (too bloody, you know?), but Russell makes it fascinating to watch. Throw in the appealing performances from the actors, and you've got a film definitely worth watching.